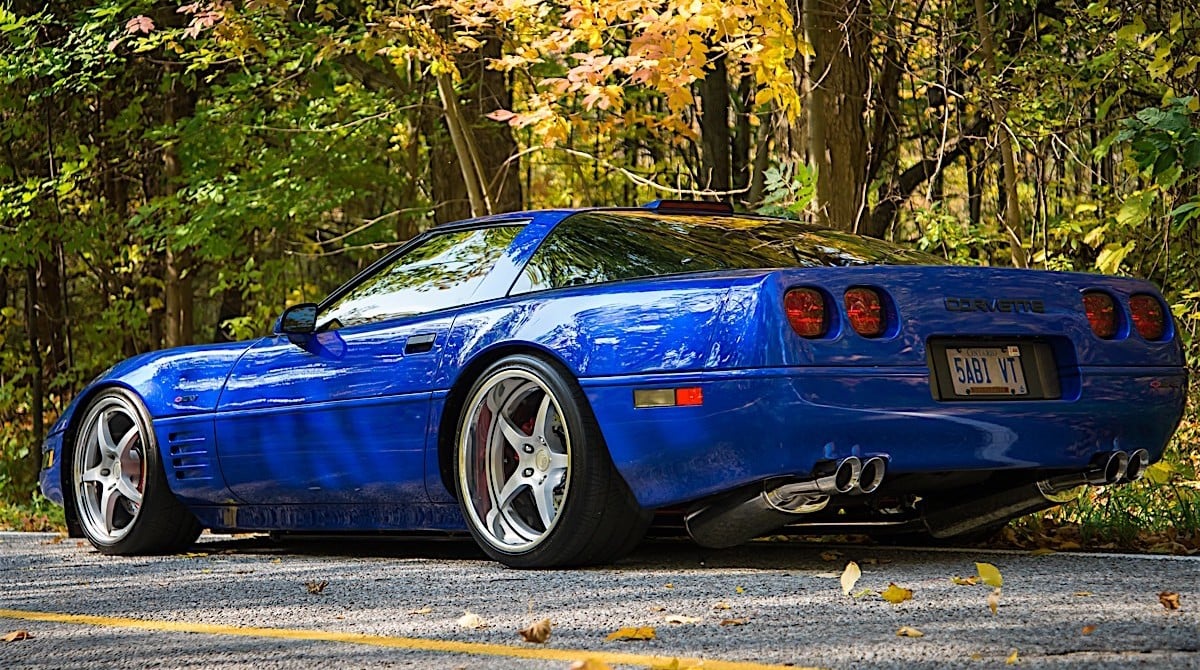 This old adage relays the notion that details matter, and whatever it is you’re doing should be done thoroughly and with meticulous attention to detail. Although attributable to van de Rohe, it was originally an old proverb that morphed over the years, but still rings true in executing something with utmost thought and precision.

Serious business getting a car to look this good.

One look at Mike Gill’s 1994 ZR-1 Corvette and these words ring true again. This old C4 has been massaged to crystalline perfection, with the end result scoring a direct bullseye in re-booting a mid-90s Corvette. In fact, with all Gill’s details painstakingly buffed to perfection, we see Jerry Palmer and Dave McLellan’s brainchild in a brand new light.

We first got wind of Mike’s car on the internet towards the end of last year. We were smitten with the then mysterious, drop-dead gorgeous, C4 ZR-1 drifting on the waves of the internet and wondered what the story was behind the build.

We posted a couple of pics of said C4 on Corvette Online Facebook and within short order, Mike posted the magic words “That’s my car…”

Turns out, Mike Gill and his 1994 Admiral Blue Corvette ZR-1 are well known in the C4 community and once we connected the dots, his story of creating the most beautiful C4 ZR-1 on the planet unfolded. Many of you might know him via his forum handle “5ABI VT.”

Hailing from a suburb of Toronto, Ontario up in “The Great White North,” Mike’s a young guy with a wife and two small children and has a knack for taking almost any kind of car, modifying it for speed, beauty and the perfect stance.

This ‘Vette was in incubation for a long time. Mike started sketching his dream ‘Vette in 1997, then built a version of it in Gran Turismo and finally, brought it to life in 2015.

Like the rest of us, his Corvette story started at a young age. As Mike tells it, “Ever since I was a kid I played with Hot Wheels and RC models, and then jumped to real cars as a teenager. I started to work on the cars and really enjoyed the satisfaction of doing all the work on my own at home. I also read every car magazine cover to cover and my favorites were always the Corvettes and the modded ‘Vettes by Lingenfelter and Callaway.”

Mike continues, “My passion is building cars into my vision of what they can be. I love to modify, alter and detail the car myself and build them into a better car. I pride myself in my aesthetic taste, design ability and creative ideas when modifying a car.“ Duly noted. Mr. Gill.

Mike’s love of cars is multifaceted as well.

He explains, “I love all forms of auto racing. I used to drive my parents crazy watching the races at full volume on TV so I could hear the engines roaring and screaming. Dale Earnhardt was a favorite in NASCAR and Ayrton Senna in F1. The late Brazilian F1 driver was the inspiration to name my son, Ayron and my daughter, Senna. My children are young but they have a love for cars as well and I do many projects with them working right next  to me.”

Mike’s 2002 Camaro SS was treated to the Gill stance correction as well.

Mike has three cars at the moment. A Quasar Blue 1993 Corvette LT4 with an Opti-Spark free, 8500 rpm, Gen II LT1 build, the Admiral Blue 1994 Corvette ZR-1 and a 2015 mustang GT daily driver with two racing baby seats in the back “that my kids love to ride in.”

A Mustang?  Yup, not only is Mike an equal opportunity car guy but by day, he works at Ford.

And before you get all crazy processing that through your brand conscious brain, know that he lives, sleeps and breathes The Big Three (2.5?) and that’s something we can all get behind.

This is Mike’s LT4 Corvette. Lessons learned here were applied to the ZR-1. This car surrendered it’s rotors to Mike’s wide-body, DOHC ‘Vette as well.

Mikes goal was to tap into the LT5’s breathing capabilities and refine every aspect of the ZR-1 to make it better all-around performance car. All the tweaks to the brakes, chassis, suspension and headers were done to the sharpen sensory and aural experience from behind the wheel. The rims and suspension mods helped visually bring the car up to date as well.

This is where Mike started. A clean 1994 ZR1 with 73,000 miles, chrome rims, no accidents and enough wheel well space to house a small family.

Mike found his 1994 ZR-1 in 2013. The car was born Admiral Blue, the 13th built that year, and just one of 44 painted that shade and sporting the standard LT5 DOHC V8 with a stout, 405hp. With a black interior and and a six-speed transmission it had 73,000 miles on the clock when he purchased it.

On the way home after he took delivery, he was a little disappointed as he thought the car felt soft, loose and old. The veteran ZR-1 did have realtively high miles and argaubly was due for a springs and shocks update, but Mike’s mind ran wild with how he would tranform it from a somewhat tired old ‘Vette in to a sharp, flat handling road warrior.

The first thing Mike did was get the car sitting right. He ash canned both plastic tranverse springs and opted for a set of Vansteel coil overs that he tweaked a bit for his application. After installation, the car came down off it’s tippy toe, factory ride height and was now ready for big wheels and low profile tires.

The now discontinued HRE 845 rims Mike chose are really the key ingredient to this build. Mike had toyed with a skinny five-spoke design on his dream ‘Vette for years and loved this old wheel style. These HRE’s are perfect for the car aesthetically and of course, took blood, sweat and tears to locate and alter to his taste.

The used wheels arrived form UK painted black. Here are the steps it took to get them to the look Mike wanted. He achieved the finish by sanding the wheels with 400, 600 and then 800 grit sandpaper, and got a smooth, “raw” finish. The centers were then powdered coated in clear to protect them from the elements.

He found a used set of 845s in the UK and paid a pretty penny to have them shipped to Toronto. Being a three-piece wheel, Mike got to work disassembling them and liberating the center stars from a questionable coat of flat black paint. He likes chrome rims but only a subtle hint, so the goal was to brush the wheel centers to a “raw” aluminum finish and have the high polish, two-piece wheel barrels take care of the bling.

Here’s how Mike got the wheels to fit just right. A lot of trial and error and mounted on the car measuring.

From there, Mike took just the the finished centers and bolted them on the car, one hub in front and one on the rear, compressed the suspension and then measured the outer and  inner barrel offsets in relationship to the wheel wells and fender lips

He was adamant about having the wheels the same diameter front and rear. No rake or staggered rim shenanigans to hinder the look wanted. Mike also mounted the valve stems in the inside of the barrels for an extra sanitary look.

Upper right: Look closely...Mike added a .25 spacer to widen the rims, stretch the tires and make the rims pop.

Next, he worked with HRE Wheels to custom fab the inner and outer barrels to his measurements. The goal was to have the wheel profile to follow the exterior body styling up front with a deep lip only on the rears to emphasize the width of the ZR1’s muscular rear haunches.

Mike explains he attained a reduction of around 20lbs of unsprung weight at each corner via the lighter wheels, calipers and rotors, and believe it or not, he says the car rides better than stock.

Mike buffed up the old LT5 to a healthy 475hp at the crank.

LT5 Gets Breathed On

The Lotus developed, Mercury Marine built 5.7L DOHC motor was heathy and strong, so Mike just helped it along.

The specs are as follows:

What a great way to update a dowdy old C4 interior. Mike used 3M 1080 carbon wrap and a heat gun and the results are impressive. Momo sterring wheel and shift knob complete the look.

The best part of Mike’s car is it shows that younger guys are seeking out these old supercar ‘Vettes and bringing them back to life.

We started Mike’s story with a quote and we thought we’d leave you with some words from Mike that  really sum up his love for the C4 ZR-1.

Mike installed a custom stereo system after a full Dynamat of the rear storage compartment, floor, sills and inside of the doors panels. Mike added a R-D harness bar and custom fabbed a top brace that he claims dramatically increases structural rigidity.

“It’s not about how fast you go, it’s about WHAT you go fast in…” Mike explains. “The reason why I love that quote is because it describes why I chose to modify a C4 ZR1. While I do love the newer generations , it wasn’t about just getting a faster car or a faster baseline to modify for speed.

It was the beauty of the C4 exterior styling, which is still my favorite amongst any generation,  the clamshell hood and tight exotic-like cockpit with the high door sills that make me feel like I’m sitting in something extremely special. And then there’s the LT5, a legend in itself. In my opinion the greatest motor GM has ever put in a car and surely the most beautiful and best sounding…”

For now, Mike Gill aka “5ABI VT” is hauling ass and enjoying his car, while the finished build creates a revitalized conversation about this misfit generation of Corvettes.

Ans, if you look closely enough at this ZR1’s shiny flanks, you can see the reflection of Jerry Palmer and Dave McLellan smiling back at you.

For a deeper dive into his build go here.

CID’s Made In The USA Racing Stimulus Package Giveaway